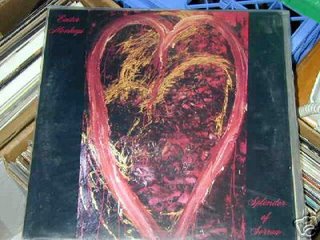 The EASTER MONKEYS often are talked about in rapturous tongues as a sort of missing 1980s Cleveland 2.0 band that never got anything near their due. I think there’s something to that. Every time I’ve heard them in passing, either on a comp or whatever, I’ve always made a mental note to dig deeper into their work & just never get around to doing so. Recently a friend made a CD-R of this 1991 album, a posthumous LP-only collection of their stuff, and I can almost see what the racket’s about. The Easter Monkeys were an undeniably intense practitioner of dark post-punk bleakness, with a sound similar but more dissonant than compadres SPIKE IN VAIN (more about them another time). Tracks like “Take Another Pill” and “Nailed To The Cross” have that layered, full-bore factory-smelter sound of MISSION OF BURMA’s “Weatherbox” with a little more punk action than Burma conjured. Those two tracks, taken by themselves, would have made for an absolutely devastating 45, and would have cemented them into legend alone. It’s funny, since I don’t know much about the Easter Monkeys (just that Jim Jones from the ELECTRIC EELS was in the band), I can easily picture them of a scene with ghoulish death-punks like 45 GRAVE and maybe even KILLING JOKE, but another track will come along, something lighter maybe, and that’ll just seem preposterous. “Splendor of Sorrow” sounds like the sort of record that’s going to be slowly picking up converts and belated accolades for decades to come for a band that very few knew of at the time. I’m just glad I was only 25 years late.
posted by Jay H. at 8:13 AM