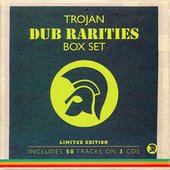 If there’s a strain of 60s-70s Jamaican music you’re itching to get better acquainted with, it’s usually a no-brainer to try out one of those Trojan 3xCD box sets. We’ve talked about a few of these before on this site & I’m a big fan of the $15-$17 price point for these things, which usually give you over 3 hours of music, much of it unavailable elsewhere or only on rare 45s and long-gone LPs. I will say that Trojan are milking the concept to death – witness relatively recent comps like the “Christmas Box Set”, the “Reggae Chill-Out box set” and the “Tribute to Bob Marley” box set – but those are more than counterbalanced with the 9 discs of outstanding dub that one can procure by picking up their three dub box sets.

The “Trojan Dub Rarities” box set is just as worthy as the other two, and has been on constant headphone duty for the past several weeks. I’m not sure how much more “rare” these sides are than others – even a neophyte like me has heard a few of these before – but the lineup is stellar and the dub is just full-tilt drop-out. You get deep killers from classic mixers like THE REVOLUTIONARIES, THE UPSETTERS, ROOTS RADICS, and THE OBSERVERS, along with weird, sparse version b-sides to 45s from AUGUSTUS PABLO, TOMMY McCOOK and a host of lesser names – some of which are the best things on here. I’m taken with a crazy echo-laden monster called “Twenty-Eight Version” by THUNDERBALL that just cooks, and another by QUEEN TINEY with backup by THE AGGROVATORS called “Natty Dread Time Dub”. Yet what really impresses me about the set is that I never once feel like I need to skip a track when it’s booming out of the headphones into my cranium – none of it’s electronic, none of it’s novelty crap, and all of it is sizzling. A better price-to-quality ratio is unlikely to be found when investigating this rich form, so Agony Shorthand says check it out.
posted by Jay H. at 9:56 AM