“BOOTLEG: THE SECRET HISTORY OF THE OTHER RECORDING INDUSTRY” by Clinton Heylin (book)...... 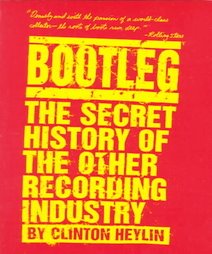 Undoubtedly like you and everyone else, I’ve always got at least three or more books sitting around at any given time that are partially read, waiting to be picked up a year or two from now to be finally conquered (or not). Their placement in this purgatorial limbo status is usually indicative of something that’s decidedly sub-par or disappointing in one way or another – either I thought I’d be interested in the subject matter & wasn’t; the writer’s just not wholly engaging but is good enough to not make you up and quit; or the subject matter’s really interesting but its presentation just isn’t. Clinton Heylin’s “BOOTLEG – THE SECRET HISTORY OF THE OTHER RECORDING INDUSTRY” probably suffers in some form from all three, and that’s likely why I only finished it this past week after putting it aside for six long years after beginning it & reading two-thirds of it (it came out in 1996). Heylin, of course, penned the first serious non-fiction treatment of the pre-punk era in 1993’s great “From The Velvets To The Voidoids”, and I lapped that thing in probably three days. Unfortunately, I found this one a real slow go. You’d have thought that a history of the shadow world of vinyl bootleggers and their triumphs, failures, arrests & legal machinations – and what their products meant to those consuming them – might have been a pretty fascinating read, and in the right hands, it might have been.

My problem with it is that Heylin – though he obviously knows a friggin’ ton about music and understands the freakoid nature of record collectors/music obsessers exceptionally well – seems to have taken this behemoth on as a “research project” or possibly even as an “assignment”. At least it sure reads that way. It has all the hallmarks of a meticulously-researched, exhaustively documented mega-encyclopedia entry, with only small bits of passion or drama peeking through from time to time. I honestly only want to know the very broad brush strokes of copyright law in order to discern a picture of what hoops rock & roll bootleggers were jumping through the world over to get their LED ZEP, STONES and DYLAN records to the collectors, but Heylin provides it all – every twist, turn and exploitable loophole in law that helped justify or shut down the bootlegger’s trade. The book has many fine photographs of rare & fabulous-looking vinyl LPs, and occasionally will help explain what made them special to their fans, but this is definitely an underground trade & commerce book first, a rock and roll book second. A distant third is the sociological and psychological underpinnings of the bootleg collector and what drives the market for, say, that Van Morrison concert in Monterey ’69. I find that sort of angle way more interesting (and naturally, personally relevant) than how Taiwanese law evolved to allow illicit record production for a brief period in the 1980s. So much of this is “skimmable” material that in the end my only real take-aways were few:

1. Bob Dylan is the most-bootlegged recording artist of all time, with the Stones and Led Zeppelin close behind
2. In the 1990s, bootleg buyers were far more apt to purchase CD bootlegs of Nirvana, Soundgarden and the Red Hot Chili Peppers than they were CD bootlegs of old Dylan and Stones shows (imagine that!)
3. The recording industry always seems to be fighting the wrong battle, fights them incoherently and irrationally, loathes their consumers, and almost always seems to lose

Furthermore, in 2006 the shadow world of 1960s-80s LP bootleggers seems remarkably quaint. Heylin in 1996 could not have completely foreseen the effect of file-sharing and Rapidshare on the bootleg (or on the recording) industry, but if it was fading out due to CDs at the end of his book, and it was, it’s just about dead as a doornail now. I can’t legitimately ask nor recommend that you invest the time required to complete this tome, as I could barely muster the courage to do so myself, but perhaps there remains an interesting and well-articulated story of this underground rock and roll shadow economy to be transmitted by someone else, maybe after the epochal 21st-Century upheaval in music consumption has settled down and taken hold for a few years.
posted by Jay H. at 9:01 AM