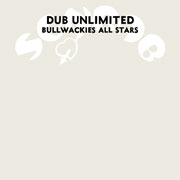 The fountain of WACKIES reissues continues to spill over, courtesy of a German crew who’ve taken the rights to the 1970s Wackies label & are reissuing just about everything the New York-based label ever put out. Naturally I’m particularly interested in the dub stuff they’re doing, since a few of those Wackies dub CDs (“Nature’s Dub”, the “African Roots” series) are among the best spaced-out, psychedelic dub I’ve ever heard. BULLWACKIES’ ALL-STARS were really just the crew behind the label, particularly maestro Lloyd Barnes, with assistance at the mixing controls from Prince Douglas and Jah Upton. I can’t get a definitive story on whether these ten cuts were a fully-formed LP in 1976, or if these tracks are a collection of 45s and 12” mixes that came out around the same time. Doesn’t matter, I suppose. This is a solid, albeit quiet collection of non-explosive, almost completely vocal-free rhythm tracks. Having heard a few of these tracks in different forms from (truth be told) Wackies 45s I downloaded off of Soulseek, I would like to posit that this was indeed a full-fledged LP, since the 45 version of the track “Dub Unlimited” is full of crazy, echoey horns & this one’s much more streamlined. There are a couple of numbers on here (“Disco Dub” and “Dubbing Around”) that echo the dancefloor hit single of the time “Disco Lady” (remember that one? “Shake it up, shake it down…” etc.) without being danceable in & of themselves. The only time this thing really pops off & hits A+ status is track #3, “Dub to Jah”, but everything else is a handsome B or B-. This rapidshare site called SHRICKDRAAD posted an ultra-rare 1975 LP from this same cast of characters called “Free For All Dub” – that’s next on the headphone lineup. I’ll let ya know.
posted by Jay H. at 10:05 AM