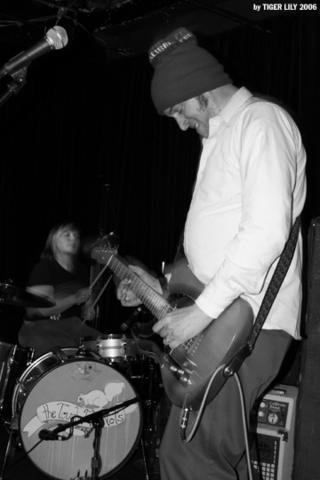 Those of you who stumbled hard for the HOME BLITZ EP might find this one from a sub-underground Oakland duo called the TOUCH-ME-NOTS nearly as right on. From my jaded perch, it’s better by a mile. When I spin the big-hole 45 grooves of their debut single I am catapulted back to the era of private-press American outsider rock that took place during the punk era but wasn’t exactly “punk” and sounded completely divorced from the present while occupying its own world – JOHN BERENZY GROUP, SCREAMIN’ MEE-MEES, and the like. This isn’t nearly as accomplished as the former nor as beguilingly retarded as the latter, but sue me if this just ain’t a fantastic debut just the same. The duo – a boyfren & a girlfren (or maybe husband & wife, not sure) pull off this real simple, fried 50s-style ruckus with aplomb, and could be a big-city cousin to modern backwoods greats like anything Jeff Evans or Walter Daniels are involved with. Yeah, and it gets better every time I hear it too. “Celebrity Roast” is the frothing, spit-flying rockabilly hit of the summer (a wild-as brother to CRÈME SODA’s awesome “I’m Chewing Gum”), and if these two take a step out of the basement this year & start really connecting with the kids, you can say that you got to hear the first one before anyone else did. That is, if you get it while it’s still around by emailing them at The_Touch_Me_Nots@hotmail.com.
posted by Jay H. at 8:53 AM