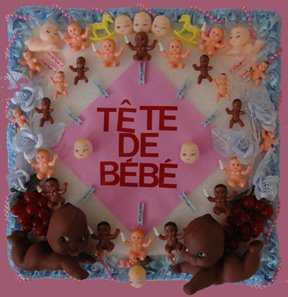 I know that when Scott Soriano’s S-S RECORDS seeks to put a comp together, his stated model follows the anything-goes art/punk nexus of the early 80s Los Angeles scene comps put out by Mike Watt & Spot’s New Alliance and New Underground labels. These include “Chunks”, “Cracks In The Sidewalk” and the three volumes of the “Life Is....” Series – compilations that would juxtapose punk scene heavy hitters of the day like Black Flag, The Minutemen, The Germs and the like with jazzbo and experimental musicians from around the LA basin. After listening to this new LP from S-S of modern French acts, I know two things for sure – that the label has followed the New Alliance/New Underground model in a cohesive and exciting manner (better than their US/UK comp “Babyhead” from a couple years ago), and that the 2006 French avant-rock/punk scene has got some serious, serious heft to it. On point #2, we already knew that when we picked up those outstanding latest 45s by FRUSTRATION and CHEVEU, and earlier still when we heard records by the Royal/Polly Magoo crew centered around VOLT, LILI Z and CRASH NORMAL, but it’s nice to know there are even more hungry & wild young pups coming up through the French rock farm system.

In France, it appears, electronics and distortion combined with raw & panicked guitars rule the roost – at least until it doesn’t. Best of breed awards go to CHEB SAMIR AND THE BLACK SOULS OF LEVIATHAN, who pull off a sort of antique, thrown-together primitivism that makes first-LP GORIES sound sophisticated, and the continually fantastic CHEVUE, who almost never sound the same song to song (this time there’s lots some Eastern snake charmer keyboards over metronomic drums & shorted-out guitar, on a brief instrumental that you wish was three times as long). There’s also the weird, dislocated spazz-out “Testicle” by CRACK UND ULTRA ECZEMA , followed by a great 45-second artpunk flutter by LE CLUB DES CHATS that might’ve been performed by JOANNA WENT or 1/2 JAPANESE twenty-five years ago. Nothing save for the kiddie band DRAGIBUS’s number is anything but first-rate on this LP, and even Dragibus are a whopping hit with the youngest preschool-age member of our household. So it’s clear that “Tete De Bebe” has something for all comers, and clearer still that that trip to the dark clubs and cellars of Paris has simply got to happen before this unique & special little scene implodes.
posted by Jay H. at 9:03 AM