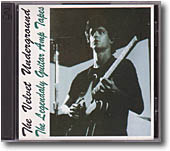 Broke this one out of storage the other day to re-live the majesty of the distorted, screaming Lou Reed solos on “I Can’t Stand It” and “What Goes On”, which are nothing short of transformative since that’s really all this bootleg is about. There’s a whole web page devoted to this terrific & unique Velvets bootleg, and here’s what they have to say about it:

On March 15, 1969, The Velvet Underground played its last show of a three-day engagement at The Boston Tea Party in Boston, Massachusetts. The entire set was recorded by a fan directly from Lou Reed's guitar amplifier. The result is that Lou's guitar is out in front of everything else. Vocals and bass are nearly inaudible, so the songs become raw blasting instrumentals. This is one of the most interesting Velvet Underground recordings available and definitively a very special experience...

At times Lou’s guitar is so overloaded that he sounds like later Japanese sound-shapers LES RAZILLES DENUDES, MAINLINER or MUSICA TRANSONIC, who undoubtedly all learned a few lessons from the shorted-out bursts of squeal the Velvets pioneered. What’s even more special about this double-CD bootleg is that the material is generally third album stuff – “the quiet record” – but live it’s anything but unless it’s “Jesus” or “I’m Set Free”. One thing that has to be appreciated in 2006 about the Velvet Underground is just how much transcendent material of theirs remained unreleased in their lifetime, and how many songs we all know by heart now (“Foggy Notion”, “I Can’t Stand It”) were only live songs back then in 1969. It wasn’t until the early 80s’ release of “VU” that this material started to trickle out, and even a few years ago more treasures came forth on the “Peel Slowly and See” box set. “The Legendary Guitar Amp Tapes” is at its best on certain numbers where Reed just lets loose and fires away – I’m not as impressed with the “Heroin/Sister Ray” piece as others might be, except for about 5 extreme minutes in the middle of “Sister Ray” which are just genius. This bootleg tacks on a couple of other songs from the same venue in Boston, but from different shows, and these (“Run Run Run”, “Move Right In”, “Foggy Notion”) are just “average” Velvets live tracks due to the non-“guitar amp” nature of them – which is to say they’re great. If you’re looking for special documents of the Velvets’ live majesty, this is one for the ages, all because one stoned fella forgot to remove his pointed little head out of Lou’s amp.
posted by Jay H. at 9:36 AM