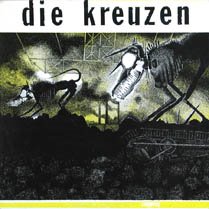 A couple of years ago I made a list, as I so often do, of the hallmarks of early 80s American hardcore punk rock. #1 with a bullet was the debut LP from Milwaukee’s DIE KREUZEN. I said something along the lines of:

Simply put, this is just the fiercest, most punishing record I’ve ever heard. If that sort of bluntness piques your interest, then the debut LP from Milwaukee’s finest is made for you. It makes God weep, Motorhead tremble and Danzig look like a mincing little pansy. In other words, it’s ballistic blast after blast of savage screams and guitars pushed into the bleed zone, and it transcends superficial ear-shredding with massive riffs and chops that move by at lightning speed. When it came out people were dumbfounded. Tim Y at otherwise poor tastemakers Maximum Rock and Roll wrote a review that was the words "This is fucking great! This is fucking great!” repeated over and over. It’s just that kind of record, barely connected to the art-metal they pursued just one album later.

I stand by that description and then some, with the exception of "barely connected to the art-metal they pursued just one album later", as that's almost certainly exaggerating to make a point. "Die Kreuzen", the album, is unlike any other HC record ever. It scrapes the edges of light-blur metal and jagged, weirdo post-punk night sounds to come up with a wholly singular & incredible record. You know, it actually came about a little late in the hardcore lifecycle - 1984 to be exact -- and I've never felt it's received its due for being as shredding as it is.

Consider the vocals. Dan Kubinski’s raw, throaty near-falsetto was multitracked and amplified such that he sounds like a screaming, lunatic creature of some kind, totally in keeping with the LP’s bizarro futuristic cover art. You might call it "heavy metal singing", but that's wildly off the mark to my ears. Guitars straddle the border between sci-fi art sounds and straight-up ripping hardcore, and that’s something they carried through to the next album ("October File") as well, albeit with a totally different production style. I reckon that for many a hardcore punk partisan, that strangeness might have been a bit too much to take. Most importantly, if you can handle how jarring this entire record is, you will find that is absolutely impossible to play it at anything but maximum volume. Thus it’s perfect for a window-rattling solo car ride or for an evening when everyone else is out of the house & you need to let out some of your pent-up shit. I call it a masterpiece, and one of my Top 20 favorite records ever.

PS - I suppose it would help to mention that you can find this album on Touch & Go's CD of "October File". It is illogically sequenced after their 2nd album, and starts in around Track #15.
posted by Jay H. at 1:37 PM