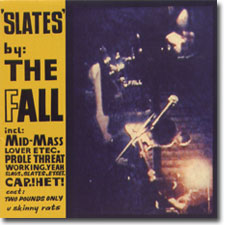 While "This Nation's Saving Grace" was the FALL LP that got me going on the band upon its release in 1985, the "Slates" EP from four years earlier was the one that hooked me in for life. I heard "Prole Art Threat" on college radio and it's one of the rare times I've been so excited I had to call the DJ to ask who it was even before the song finished ("Agitated" by the ELECTRIC EELS a couple years later was another). Though in this case there never was any doubt who it was; it was "What record is this one on, and where can I find it?". There was a period from about 1987 to 1992 where every trip to the record store started in the "F" section to try & track down the complete Fall discography; my holy grail, my mission in life, was to own "Room To Live" , and I never found it on LP before it came out on CD in the mid-90s. "Slates", though, I snagged pretty early. When I go on my periodic FALL benders every couple of years (I'm in one now), this 6-song EP always seems to come up aces as one of my two favorite things they've done, right after what I still believe is their masterpiece, 1982's "Hex Enduction Hour".

Right smack in their master period that's bookended by "Grotesque" a year earlier and "Perverted By Language" two years later is this 1981 EP, which starts off with a shambling, stunning track called "Middle Mass". I think of this quixotic but hard-driving track as being equal parts MAGIC BAND and somebody's demented version of Krautrock, but thinking about it a little less reflexively, it's as if a whole new idiom for rock and roll was being created on the spot. When people talk about "Messthetics"-style UK homeschooled basement rock, this is what they're talking about, and The Fall are so obviously the lords of that sound that everything else (Scritti Politti, Young Marble Giants, Desperate Bicycles - great as they all were) seems small beside them. Maybe your signature moment on this record is instead "An Older Lover Etc." or "Slates, Slags etc." or "Leave The Capitol" - a case could certainly be made, as they're all classics, but nothing to my ears can touch the berzerk "Prole Art Threat", a barreling grindhouse of squealing guitars, spazzy, militaristic percussion, mind-expanding repetition, and the patented non-sequiter-laden Northern British "rap" of everyone's working class hero, Mark E. Smith. When my current Fall bender ends, I'm sure this one will stay where it's always been - on the "easy to reach" shelf in case I need to be reminded why they were the greatest band of the 1980s.
posted by Jay H. at 9:00 AM