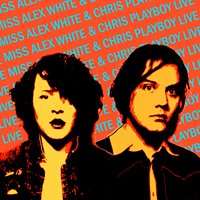 It’s hard for me to get too worked up about live albums in any way, shape or form, and I guess that makes me an outlier vs. most folks. But I can get pretty excited about this one. MISS ALEX WHITE is one of my moderne faves, and a couple years ago (1/22/04 at the Double Door in her hometown of Chicago) she teamed up with a guy named Chris Playboy (on drums to her guitar, I presume, since I hear no bass guitar) to kick out the lowdown, fuzzed-out pop-garage jams. Unfortunately, he wasn’t around much longer to hear the fruits of their union, as he was regrettably killed by a hit-and-run driver later that year. His bashing is straight-up and in perfect time to Alex White’s warm, ringing guitar, and on tracks like “Makeout/Breakout” they’re just aces. Cues are taken from late 70s/early 80s UK post-punk at times, but I swear if you told me this was from a 1979 Masque reunion of some kind (with a hearty dose of fuzzbox) I wouldn’t bat an eyelash, because everything Alex touches has this glittery Los Angeles punk moondust sprinkled on it, which probably has a lot to do with why I dig it so much. There’s also a SCIENTISTS fan or two in this duo. There’s nothing I can say to unrecommend this to you other than it’s live and not studio, and since it’s so well-recorded and so goddamn good we can call that a wash as well. Get it!
posted by Jay H. at 9:37 AM