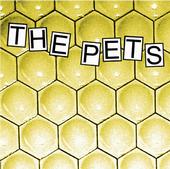 Remember a Pacific NW band in the early 90s called FLATHEAD? Me too! (If not, try and find “Wonder Woman” on one of those old Regal Select “Puget Power” comps – a desperate, raw-ass garage punk cry for help). There’s also a connection (same guy, Dan Wood) to RIGHT ON, one of the many incredible Rob Vasquez-led bands in Seattle over the years – which means instant credibility in our eyes. Not to mention an ex-FM KNIFE (?) and an individual from short-lived door-blowing punk act SHORT EYES. Turns out that these fellas coagulated around the SF Bay Area some time ago and recently started a band called THE PETS. I saw them once last year and the spirit didn’t move me, but this 45 is real fine. The A-side has some fast-blaze motor punk action going and some strong vocals – like a 21st Century RADIO BIRDMAN who’d finally shed all the bar-band nonsense and over-the-top vocal histrionics & just let it rip. I don’t know, there’s a certain guitar sound this guy gets out of his “axe” that’s a little bit beat-up garage shit rock, and a little bit “pro” Rip Off-style punk. The B-side drops the quality down a bit, but who cares – the 45’s gotta be a teaser for the album! The album! Right guys?
posted by Jay H. at 8:32 AM