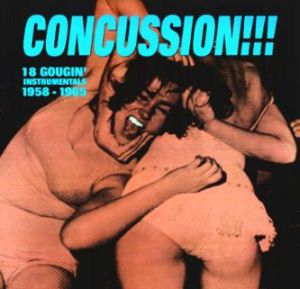 In the late 50s and early 60s, many a teen picked up a guitar in emulation of minor hitmakers DUANE EDDY and LINK WRAY & formed bands dedicated to furthering the vocal-free, rough garage band sound. This brief instrumental ascendancy is not to be confused with surf music, though there’s no doubt that they were 2 sides of the same coin, and that many of the bands vacillated between both forms (the reverb-drenched & the non-reverb drenched). I went through a brief period myself in the early 90s gobbling up as many 50s/60s instrumental compilation LPs as I could afford, since I’d fallen hard for Link Wray’s stuff and had also picked up a couple of the Crypt Records “STRUMMIN’ MENTAL” comps that set me on the obsessive instrumental-freak path. You know what, though? My favorite of the bunch is not a Crypt release – it’s “CONCUSSION!!! – 18 GOUGIN’ INSTRUMENTALS 1958-65” on the relatively release-challenged Mr. Manicotti label.

This gold-standard instrumental LP contains so many bust-up, frantic sub-2 minute chargers you can’t help but keep your wingtips from scattering, and when it gets right down to it, it’ll set you to digging out much more of this stuff. (If you do, go next to the two “Strummin’ Mental” CD comps). The LP contains a 45 so raw & so achingly beautiful I’m confident enough to proclaim it one of the 100 greatest rock and roll 45s ever. Of course I’m talking about THE NAUTILOIDS’ “Nautiloid Reef / Nautiloid Surf”, and punctuating their 1965 flash-in-the-pan brilliance, it’s the only thing the band ever put out. Both tracks are minor-key, mid-tempo stompers, and they conjure up a contemplative, staring-at-the-surf mood without resorting to any surf music clichés. The genius doesn’t stop there. Other corkers include the ROCKIN’ REBELS’ “Tom Tom” and the DOWNBEATS’ “Wild Side”, both of which should become lingua fraca for all true fans of high-energy rock and roll music from this point on. But, you ask, how can I make this a part of my life when the LP is undoubtedly out of print and will cost me a fortune? That’s where the Internet comes in. I recently snagged this from Chocoreve and roasted up a CD of it (which is why this LP’s fresh in my mind again), but it appears that someone complained about it and the good anonymous folks at Chocoreve had to pull the files. But this guy’s got one for twelve bucks – and that’s a bargain in any language.

PS - just found out that this fella posted it and it's available now.
posted by Jay H. at 9:12 AM