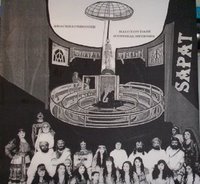 This collective of Kentucky cornballs are part of the next wave of Siltbreeze Records signees, and to my ears they fit in perfectly – which is to say nowhere else. Imagine the 1978 CHILD MOLESTERS with access to shorted-out & far-gone primitive keyboards, during a little extracurricular jammin’ in the practice space whilst shrooming – at least that’s the vision I get during the three tracks. “Krackhaus Blooze” starts out like a psychedelic road hog with exploding guitar everywhere, then gets a little jazzbo and Beefheartian from there. The rest of the record then goes more “free” from that point, in the sense that the ascending heaven-climbing clatter of the STOOGES’ “LA Blues” was “free”. A creepy dirty-uncle vocalist sort of weighs in from time to time, but you’re never really sure what he’s going on about. I like it, I just don’t wanna marry it yet.
posted by Jay H. at 7:48 AM