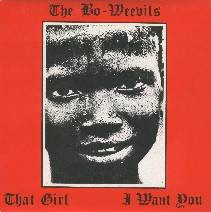 I guess some would surely quibble, but for me, the single best generational update on the 1964-67 American, UK & AU/NZ garage rock template was the award-winning class of the early 90s: the GORIES, the CHEATER SLICKS, the NIGHT KINGS, SUPERCHARGER, the OBLIVIANS, and all the others I've flogged on this site and in my fanzine from that era. Something about the 1990-95 time period lent itself to one killer 45 after another from these bands and their peers, and what they did to mold and expand that very simple 60s template (adding in Scientists-style feedback & hiss in the case of The Cheater Slicks; amping up and exploding into chaos in the case of The Oblivians -- for instance) puts these bands in a class by themselves. By contrast, the popular consensus on 1980s garage is that it was full of devotional retreads and tribute groups like the TELL-TALE HEARTS, the MORLOCKS, the FUZZTONES etc. While some of these bands broke the mold occasionally and came up with some top-shelf, original killers (I'm thinking of The Morlocks in particular), the consensus is more often correct than it's not. Yet the back half of the 80s contained a real small but stupendous batch of garage 45s that led us into the fruit basket of the early 90s. Some of these lacked a constituency in the first place and are almost totally forgotten, or vanished for years and only resurfaced when the band changed direction and picked up more converts. I flipped through my 45s and my memory bank, and came up with 12 singles that shine a light on the best the 1980s had to offer in this micro-genre:

1. THE NIGHTS AND DAYS : "These Days / Lookin' " 45....One of my favorite records of all time. I'm not sure why I left it off a list I once made of my top 45s -- I think I was counting on a lack of staying power and an eventual turn away from the garage punk of my wayward youth. Yet once you hear this thing you'll know why Seattle's Nights and Days were absolutely timeless purveyors of the raw art of amplified, guitar-driven songwriting. Put this on a shelf next to The Modds, The Keggs, Murphy and The Mob and The Rats. Time has proven that it belongs with the greats.

2. BO-WEEVILS : "That Girl / I Want You" 45....The Gories claimed this one as a big influence, and it's not hard to understand why. Total stripped-down primitivism, but with a simple, well-played melody in the background that adds some romping bounce where The Gories subtracted chords, structure and skill. These Australians continued for many years beyond this 1986 classic, but to the best of my knowledge this was the single example where they really nailed it.

3. THE FALL-OUTS : "Here I Come" 7"EP....I joined a band in 1990 and wanted this single and Dave Holmes' trebly chuka-chuka-chuka guitar style to be the template for everything we did. We didn't come within a country mile, partly because I couldn't play, & partly because this thing's too singular and unique. The Fall-Outs put forth four golden, speedy, pop-grounded garage punk tracks on a tiny Seattle-area label (Regal Select) in 1988 and watched them sink without a trace. Thankfully they can all be found on a CD collection called "Here I Come and Other Hits", in which you'll hear how a combination of strong melodic vocals, ultra-short song lengths and a creative set of lightning guitar chops add up to a terrific, severely underrated career. This single is about as "mono" as it gets.

4. DWARVES : "Lick It / Nothing" 45....Genius. This is the bridge between the 60s-slathered "Horror Stories" LP and the overloaded hardcore screamer the band morphed into by 1988. Both tracks are mid-tempo, but snarl and howl in the most aggressive, pissed-off and over-amped manner imaginable. If there's a louder 45 in my collection, I'm deliberately forgetting it. No one could touch these guys for attitude and sheer hell-bent-for-leather live entertainment after this record came out.

5. ORIGINAL SINS : "Just 14 / Sugar Sugar" 45.....The highly-touted "BROTHER JT"'s first band. The A-side is just insane -- feedback and screaming about the joy of sex with underage girls. It knocked everyone for a loop when it came out, and it's still one of the rawest, most scorching records I've ever heard.

6. THE NIGHTS AND DAYS : "Garbage Can" 7"EP.....Their 3-song debut is just as incredible and as undeserving of deep obscurity as anything on this list. Big, loud, stomping basement rock that approximates a runaway boulder hooked up to a set of clanking chains. Their sorta-cover of Beefheart's "Diddy Wah Diddy" could almost be no-wave inspired, and the frantic chords played on this sound like they're shooting sparks. Rob Vasquez was and remains a singular talent who deserves to be handsomely paid for his genius, and lionized & feted the world over.

8. EASTERN DARK : "Julie Is a Junkie / Johnny & Dee Dee" 45.....Maybe a bit wimpy in retrospect, but I really dug this at the time. Ramones-inspired garage pop from Australia, with some enormous hooks. The singer looked like Buffy St. Marie and was probably quite the ladykiller for ladies who loved the longhairs (LLLs); unfortunately he died while the band was still in existence, cutting short a solid body of work that included this excellent 45.

9. SLOTH : "Fetch The Wedge / Miss Sleazy Underbelly" 45....Actually saw these guys play live at The Chatterbox (see below) around 1989; they were full of piss & vinegar swagger and full-on Brooklyn attitude, much of which translates extremely well on this balls-out 45. Glammy, obnoxious garage rock that would've been a huge hit if they'd plied their trade in Seattle instead of being buried deep within NYC (imagine that!).

10. DEVIL DOGS : "Twist and Burn" 7"EP....Gum-smacking, hair-combing Jersey jack-offs who I think were generally overrated at the time and who were one of the stoopidest bands around, yet this Australian EP was really smoking and right-on, particularly the rollicking 50s-ish title track (complete with handclaps!) and "North Shore Bitch". Not exactly a politically correct group of guys, which in the late 80s was total heresy, and another reason to tack on some points in their favor.

11. ELECTRIC MANCHAKOU : "Hey" 7"EP.....Now we're in the realm of the really obscure. This was an exceptionally fuzzy and strange UK electro-punk single from a band that vanished and left no residue. "Hey" in particular reminds me of a 60s-inspired CHROME or METAL URBAIN, while the other two tracks "rawk" but not quite as aggressively. One of the fellas on the sleeve had an outstanding white man's 'fro, which is perhaps what got my wallet out of my pocket back in the day.

12. WORKDOGS : "Funny $ / Last Friend's Gone" 45.....Finally, this long-running New York duo's debut 45 from 1986, featuring Rudi Potrudi from the Fuzztones blowing an absolutely wailing harmonica & negating all the damage he did to rock and roll with his own band. The A-side's something like 7 minutes long, and is ultra lo-fidelity retard blues of the highest order. Nothing I've heard from The Workdogs since can touch this debut, though I imagine it would be an exercise in patience and calm for most folks.

Agony Shorthand would appreciate any additions to this canonical overview you'd care to add, as well as moonlit memories & starry-eyed recollections of the bands in question!