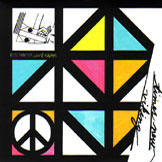 A more textbook band to inherit the Datapanik / Anyway / Siltbreeze / MIKE REP-affiliated mantle in 2005, more than a decade after that make-believe scene earned its stripes, could not exist unless we made them up -- and if we did, they still they wouldn’t be as good as TIMES NEW VIKING. Right before their very fine CD “Dig Yourself” came out this year, there was this Love/War themed 45 on “Columbus Discount Records”. Like the CD, it was lovingly engaged with by Rep himself, so there’s a lot of dense aural glop to deal with, adding beauty rather than obscuring it. Times New Viking sound like they just sort of magically appeared on the continuum, armed with San Francisco ’68 analog keyboards, jarring, discordant “harmonies” (if you can call ‘em that), and a spasmodic smack-it-around approach to playing the guitar. Their songs on this one sort of yelp and yip and stay real simple in a fractured & unwhole manner, take a few melancholy turns around the bend, and then flame out satisfyingly. Yes, there are still unassuming yet exceptional 45s being made like this in 2005, and you might want to consider doing the little extra work it’ll take to seek this one in particular out.
posted by Jay H. at 8:01 AM