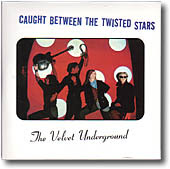 One thing I truly enjoy about the somewhat-interactive nature of this site is how much stuff I’ve been advised to follow up on vis-à-vis the comment boxes. Sometimes I even do. In reviewing the Velvets bootleg “Screen Test: Falling in Love With The Falling Spikes”, I was informed that what I really needed to hear was “The Psychopath’s Rolling Stones” to get a true bead on the best Velvets boot material. Reviewing that disc, I was put under advisement that, no, the best collection of VELVET UNDERGROUND bootleg material was actually a 1998 four-CD box set called "Caught Between The Twisted Stars". The fella that put out the recommendation then went and roasted it up for me on CD-R – what a hero! Took a while, but I’ve made it through all four discs 3 times each, which is usually my litmus test before I can think to type up a review (I relax this standard at my discretion but generally hold firm to the rule). Not that it wasn’t trying in parts, but hey, that’s what we do here. What the creators of this package set to pull off was taking what they believed to be the best of the Velvet Underground bootleg material already out there, and make up their own fantasy box set of what would be on it. If you conform to their vision of best = rarest and/or longest, then this set’s probably for you. Let’s take it from the top:

Disc 1 : “EXPLODING PLASTIC INEVITABLE b/w POOR RICHARD’S”.....Notable for taking virtually all of an already-existing bootleg of the band’s 1966 show in Columbus, OH, this disc contains a looooong 30-minute version of a metronomic sometime-set opener called “Melody Laughter”. Nico’s vocals don’t even begin until 19 minutes of plod have transpired, but the song is really lovely in places. Far better are the killer versions of “Venus In Furs” and “All Tomorrow’s Parties”, and the tacked-on 6/23/66 “Run Run Run” and “Venus” from a Chicago show. Totally deadly. 1966??!? Are you kiddin’ me?

Disc 2 : “THE CHIC MYSTIQUE OF NOTHING SONGS”......Another excessively long droner called “Nothing Song” from that Columbus show, and another experimental 28-minute+ rarity from January 1966 in New York called “Chic Mystique”. Just because it’s the Velvets and it’s rare doesn’t mean it smokes, but both ably demonstrate the school of LAMONTE YOUNG minimalist explorations that band grew out of & also the era in which Cale, not Reed, was the band’s obvious leader and muse. The 19-minute 1970 mesh of “Train ‘Round The Bend/Oh! Sweet Nuthin’” is hideously boring – one hopes that the audience, like the band, were dosed heavily on barbiturates and cocktails and found a way to work this into their personal downer groove somehow.

Disc 3 : “SWEET SISTER RAYN’S HEROIN”......Now we’re talking. “Sweet Sister Ray”, a nearly 40-minute candy-coated prelude for the raw power and chaos of “Sister Ray”, is here from an oft-circulated bootleg recorded 4/28/68 at La Cave in Cleveland. The version of “Sister Ray”, though, from the outstanding 1969 Boston “Legendary Guitar Amp” boot, is the real thrill ride here – overloaded guitar damage like you wouldn’t believe, putting even the recorded version to shame. W-o-w. It mutes any complaints I have about a 1993 (!) “Hey Mr. Rain” being on here. The 4-song disc ends with an excellent take on “Heroin” from a La Cave show two days after the one that starts the disc (the band loved playing Cleveland Rock City and seemed to be there all the time – which, as others have pointed out, may have something to do with that city’s crucial contributions to the rock canon circa 1974-76).

Disc 4 : “ILLUMINATIONS OF ATONALITY”......Maybe the most consistent disc of the set, with the same super-electrified version of “Run Run Run” (8/2/69, New Hampshire) that appears on “The Psychopath’s Rolling Stones”, as well as a totally-unknown-to-me duo of Paris recordings from 1972 from Cale, Reed and Nico (have read about these but never heard them until now). One of the tracks is a jaunty novelty/brag about the band sung by Cale called “The Biggest, Loudest, Hairiest Group of All”; the other is a fine, subdued walk through “Black Angel’s Death Song”. A track called “Searchin’” is actually a different mix of the LP version of “Sister Ray” (even cruder than the “WL/WH” version”); there’s a also a mono mix of “Lady Godiva’s Operation” (wait, I thought the record was mono?). Some other ephemera show up as well.

Collecting Velvet Underground bootleg material is not a fool’s game – this band had enough different guises and popped up with so much incendiary live material (much of it aurally enhanced by the hiss of 1960s-era tape decks) that I’m certain that there are still more great ones to be had. Taking this one in in four distinct drops requires some rigor and patience, but the payoff is definitely there. I could (and might) make a single best-of-Caught-Between-The-Twisted-Stars CD that’d knock the socks off your ass.
posted by Jay H. at 3:56 PM