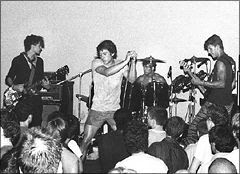 It has now rained for 347 days in a row where I live, so I helped combat an overwhelming sense of ennui and generalized inner rage by kicking it down to a bunch of radical jamz over the weekend. First up was the new one from the FIERY FURNACES called “Bitter Tea”. No surprise, given their most recent abomination, that this one’s weaker than watered-down English Breakfast. They have ceased being a rock band, and now seem quite content with lots of blooping and bleeping technobabble and nerve-grating non-sequiters, both musical and lyrical. The band has traveled miles backward from the wonderfully weird guitar/piano/effects/voice duo I fell for in 2004, and while I admire their we-don’t-care-if-you-hate-us chutzpah, I am officially closing the book on ‘em, as this one’s nearly as annoying as the last one......another 2004 favorite with an album soon to come out that I’m not feeling the love from is by San Francisco’s VETIVER. They’ve got a new record called “To Find Me Gone” that sees them moving from hippie-hazy to baroque-indie. It’s not bad, it’s quite pleasant even, but it lacks the sort of backporch folk melancholia of their debut. I have taken more barbs, slings and arrows for liking this band than for liking any other (people who read this blog seem to loathe Vetiver with a passion typically reserved for, say, Devendra Banhart), but am I off the hook now since I’m lukewarm on the new one?

Thankfully when new releases are getting you down you can always cuddle up with some old friends. Take the “Hit and Run Demo” from hardcore heavyweights VOID, which is their first set of recordings from a Maryland studio in 1980, before their “Flex Your Head” stuff and of course before their walloping side of the FAITH/VOID LP. Now this is nowhere near as berserk as their side of that LP, but man, Void (pictured above) just had the most bizarre, atonal definition of what American Hardcore was – they ran everyone else’s idea of this sound (loud/fast/angry) through their own wacked filter and came out with a wild sound like no other. Many of these recordings didn’t even hit the 20-second mark, and while some are nothing like their later work (“Summer Sucks” brought a particularly goofy grin to my face), while others are just bent beyond belief. A true original. Get it on Soulseek. I did.....I kept passing this “BOONIAY! : A COLLECTION OF WEST AFRICAN FUNK” CD in the stacks for a couple of years before getting deeply involved with it. It’s nearly top-shelf. Imagine a collection of ten unique African mid-1970s artists who’ve ingested years of JAMES BROWN and P-FUNK and are pouring out their learnings in a unique, percussion-heavy Afro-funk “long jam” style. Very strong collection, maybe not as good as the GHANA SOUNDZ comps but an admirable next step in your research process.......Well, someone finally broke through my unbending, intolerant stance against late 70s “powerpop”, a rock subgenre I hold in roughly the same regard as I do “grindcore” or “spoken word”. Hyped2Death just put out a comprehensive collection from Milwaukee’s SHIVVERS called “Lost Hits from Milwaukee’s First Family of Powerpop, 1979-82”, and I have to admit that after approaching it with fear & trembling, it ended up giving me a warm feeling where it counts. They remind me of a cross between THE PRETENDERS’ first album (my 7th grade favorite) and early FASTBACKS, and have one bonafide knockout “hit” – “Teenline”, the one that Hyped2Death named an entire series of compilations after. Bouncy, upbeat and full of roaring hooks – but still very homemade-sounding, like a local band who wowed them night after night in Milwaukee yet were never heard two counties away. That’s all for me now. Keep your feet on the ground, and keep reaching for the stars, OK?
posted by Jay H. at 11:01 AM