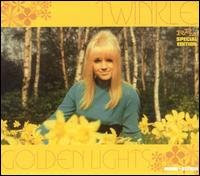 Not sure if I’m just poking around the wrong petunias, but ever since “The Golden Hits of Lesley Gore” I have not purchased nor owned a start-to-finish single-artist girl group CD that was five-star. Even the everloving SHANGRI-LA’s are inconsistent on their greatest hits comps, and it’s no different with this TWINKLE CD. Twinkle, you may remember from our post on the Rhino girl group box last week, was a young British lass from the 60s with an incredible song in the “he was reckless, now he’s my dead boyfriend” genre called “Terry”. That was her first single, penned by herself and released to much UK acclaim in 1964, and followed up in 1965 by another knockout 45 called “Golden Lights”. Her early singles are comped in order on this CD, and decline semi-precipitously in quality until her last mediocre one in 1969, “Mickey”. The best ones are pure booming beat-girl pop bliss, including “Tommy” and “A Lonely Singing Doll”, and you just gotta hear them. Better than anything I’ve ever heard from contemporaries CILLA BLACK and SANDIE SHAW by a mile. After that she worked on a subsequently aborted LP in the 1970s, and then put out one “Soft Cell”-ish single in the 80s, none of which is worth a second listen. I will say her brazen, logrolling tribute to all women in the radio industry (“Radio Station Lady”) is such a great gambit to get airplay, I’m reminded of all the other “radio” songs that got played by egotistical DJs in the 70s (anyone remember “Who Listens To The Radio” by The Sports?). Twinkle, I know Morrissey loves ya and I do too, but this $17.99 CD is exhibit A in my “Rapidshare Connundrum” CDs that I would have happily downloaded rather than fork out the cash I did.
posted by Jay H. at 8:41 AM