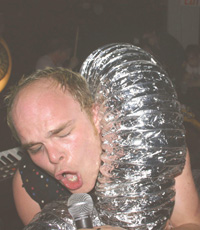 I had the most disorienting experience walking into this downtown Oakland club last Friday night; knowing I’d seen MONOSHOCK while under the influence of mind-altering alcoholic beverages here something like 12 years ago, I was already prepared to have to reacquaint myself with the club, but was amazed how little (i.e. none) of its interior & exterior I recognized upon walking in. I mean, that’s gotta be some pretty good 1993 vintage Pabst Blue Ribbon, you know what I’m saying?? Turns out the club relocated to a new spot years ago and no one told me. First up was a pop-punk act of some kind, followed by THE PETS, a fast & crunching garage band whose set I mostly missed, dedicated as I was to mastering the nooks & crannies of the “new” Stork Club. I was told the bass player from the GRIS GRIS moonlights in The Pets, so there you have it. I won’t allow myself to logroll about KILLER’S KISS since they’re my pals – they left hours after this show for a 2-week US tour, which, with any fortune, is playing a basement or a party in your town tonight. Look it up!

HUMAN EYE were the band most folks were here to see, and as an unabashed fan of their debut CD of skronking Detroit electro-punk splatter, I had to get an up close & personal look. Unfortunately, the band instantly violated two of my most deeply-held rock show pet peeves – to wit:

1.) Bands should always set their equipment up and get up there to rock as quickly and efficiently as possible, and

2.) Bands should never insult their paying customers by deliberately pogoing into or violently careening onto them, or by condescendingly approaching the audience in a hostile & non-forthright manner

On peeve #1, Human Eye took nearly an hour to set up their wacky stage props (eyeball, space craft detritus, etc) in a tiny club that they’d been hanging out in for hours. Then came tuning, then came a bunch of aimless loafing, and then & only then came the noise. Thank Christ the Stork hired DJ Mitch Cardwell to play the holy bejesus out of his rare punk 45/LP collection at top volume, giving me & others ample time to ogle his vinyl and maybe – just maybe – dance a little bit (on the inside). On peeve #2, well, I never saw the CLONE DEFECTS so I don’t know how much this is part of main guy Tim Vulgar’s shtick, but he was one of those frontmen who just get under my skin in a hurry – preening, flouncing “tough guy” BS, menacing the small crowd with a big “grrrrr” plastered on his mug at all times & committing the aforementioned cardinal sin of physical contact, when physical contact is neither warranted nor wanted. Oh – and they only played 8 songs, and they weren’t really all that exciting. Too fast, or out of tune, or something. I don’t know. The last two numbers got some positive bonzai energy flowing as the keyboards groaned & fed back and the band seemed to be sonically hotwired all of a sudden, then it was “good night” & the dissatisfied Oaklanders streamed for the exits muttering gravely about "their money’s worth". That CD is a must, one of the best things this year, but if this is representative of the Eye’s live show, then goddamn it, I’ll just stay home next time and really show ‘em!
posted by Jay H. at 7:57 AM