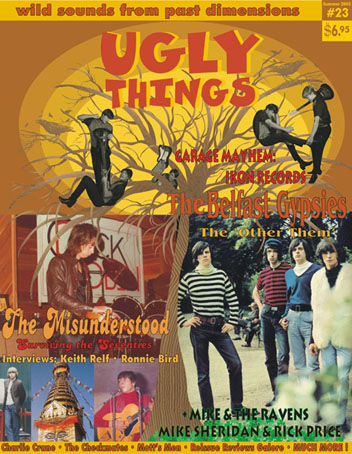 Someone once said on this site that it was obvious that I didn't "like" UGLY THINGS magazine, yet nothing could be further from the truth. I happen to have a strong appreciation for the way the love of music can make intelligent folks go utterly bonkers, and therefore spend precious waking minutes obsessively cataloguing and testifying to their faves in the hopes that someone else might catch on. It's why, despite my better judgment, I still post entries to Agony Shorthand at least 3-5 times per week. I'm right with you, Stax & co. I'll buy your magazine every time. Where I part company with the Ugly Things crew is in attempting to see the forest for the trees. For every genre of music, including 60s garage and beat, there is a cut-off line, below which the music is so unremarkable or throwaway that it merits not a second's worth of debate. For Ugly Things, that line is waaaay down there. Not only does Ugly Things refuse to really "debate" anything (bad reviews are barely allowed -- you can actually watch reviewers like Mike Fornatale squirm as they attempt to be magnanimous), but they joyfully celebrate every unfilled pothole from the 1960s -- like, in this issue, "The Checkmates", "Charlie Crane", "The Belfast Gypsies" and "Las Mosquitas". Those might be some fucking out of control rock monsters, but I highly doubt it, and the approach to their music is strictly biographical name/rank/serial number scribing. Aggressive skimming is unavoidable.

Still, the sheer repetition of underwhelming 60s rock music paints a picture of a sort, and the Ugly Things team are so incredibly clued-in to their world that you end up getting jazzed about some of it in any case. Not like I need another 60s punk comp, but they've got me excited to buy "The Ikon Records Story" 2xCD (Sacramento!!). They also view just about every cool music DVD that hits the shelves and read every single rock book as well, and if that's your bag, these guys have it nailed better than anyone. This particular Ugly Things issue seems to be lacking a little something, like they're just waiting to get this MISUNDERSTOOD saga out of the way before relatively firing on all cylinders again. And I never thought I'd say this, but I actually miss Johan Kugelberg this issue (I guess he was making his electroclash album with MOBY). Still, for 9 Paypaled bucks, you've got a quality read that'll last you all Autumn. The worst Ugly Things is better than, say, the best "Maxim Blender".
posted by Jay H. at 8:44 AM