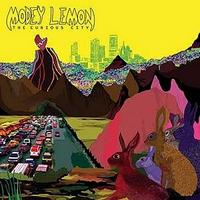 Having declared MODEY LEMON one of the hottest bands on the planet in multiple posts on this site, I was hoping that their third album would stand proudly in tandem with my assertions & give me the ammo I needed when challenged. Just last month I saw them live for the first time and was suitably impressed, even with the new batch of raw power smokers they rolled out for the occasion. “The Curious City” meets me about halfway, I reckon – it’s a fine record by just about anyone’s standards, but immediately takes its rank as the third-best of the band’s 3 albums. For the uninitiated, Modey Lemon are now working a sub-terrain of dissonant rock halfway between BAD COMPANY (or BAD CO. as we call them around here) and CHROME. That means boss 70s power riffs that split into weirdo shards of synth hiss and brain-erasing guitar when the band’s at peak form. They are a l-o-u-d band, even on record. This one cleans up some of the more overt distortion and crackle heard on their last record “Thunder + Lightning” (for my money, their best by a mile), which helps the listener laser in better on the songs themselves. Is that a good thing? You be the judge.

If you have an aversion to songs about hobbits-n-hares, kings and magic castles, well, you might find yourself a little rankled with this one – I know I was. That Renaissance Pleasure Faire BS is about as lame as it comes. At the same time, the songs that deal with said subject matter are few in number, and it’s all so opaque and fuzzed-out that it’s not worth getting too chuffed about. And the smokers that had me doing the dance live are still white hot on “vinyl”, uh, disc – “Mr. Mercedes” and “Sleepwalkers” in particular. But a 16+-minute album-closer (“Trapped Rabbits”) is 9 times out of 10 a bad idea, and this one’s just boring and plodding and could have instead been broken into four distinct wallopers instead of one time-to-eject-the-CDer. Dave Martin, am I right on this one? But let’s be clear on something – for all my bellyaching, MODEY LEMON have still got it in spades. The bass and synth are run through all sorts of effects so as to maximize the roar, and as mentioned in a previous post, the bashing drummer is Big Bonzo incarnate. Modey Lemon’s multiple layers of thud can be truly spine-rattling when they want it to be, and taken in sum, “The Curious City” is a real beast, just one with a dumb wizard’s hat and a few straight, gleaming teeth.
posted by Jay H. at 8:49 AM