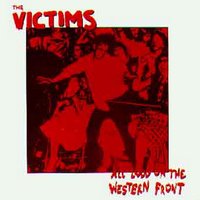 In a country (Australia) that was bursting at the seams with raw, energetic-as-all-fuck punk rock music circa 1978, THE VICTIMS' hot morsels might have been the best of the bunch not provided by a band called X. Their songs were so loud, so bleeding, and yet so toned & smoothed with top-notch vocals and massive hooks, that it's hard to reckon with how generally unheard of they are. (Though I did wander into a record store in Tokyo, of all places, in 2003, heard the band on the in-store PA, shot the cashier a double-take, at which point he looked me square in the eye and confirmed with knowing coolness: "Victims"). "All Loud on the Western Front" surfaced in 1989, and it's a collection of both of their 45s, one of which was really a 5-song EP deal, plus the added smoker "Perth Is a Culture Shock". That song alone is worth sacrificing a goat for -- jagged, wall of hoomph guitar that attacks and attacks and doesn't let up -- the sound of a young amped cola freaks playing a song destined for 45pm at 11orpm. No way is it "hardcore" -- it's extremely fast (n' bulbous) punk rock. You can hear the same exact ripping formula on "TV Freak", which is a nearly identical song in both speed and structure. Come to think of it, so is "Flipped Out Over You". Wow -- classics all around.

The band is most known for their debut '78 single "Television Addict", which I've ranked at one point in my life as one of the "Forty-Five 45s That Moved Heaven And Earth" (uh, "whatever"). It's just one of the all-time heavies, moving at mid-tempo (for 1978 Australian punk) & with a sordid story to tell. Vocalist Dave Faulkner found some in-country glory as a later member of the HOODOO GURUS, and if you ever remember anything about that band, you'll remember Dave's pipes -- a raw throaty shout that was still sweetly constructed to aggressively sing pop music. In fact, if The Victims' outstanding "High School Girls" wasn't bluntly about the joys of shagging 15-year-olds with pigtails, they might've seen the chart action that Dave's later band did. Too great. We talk a little early punk rock over here at Agony Shorthand, but we're often yakking aimlessly about the second or third tiers, the stuff sitting below the WEIRDOS, PAGANS, GERMS, BAGS and CRIME. This band, The Victims, sat in the fabled catbird seat with the aforementioned, and if you haven't heard this stuff, you are truly gonna bust a big-ass nut when you do.
posted by Jay H. at 8:09 AM