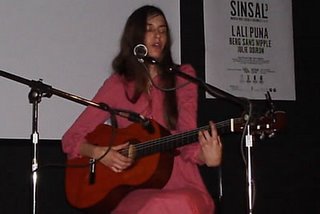 I am slowly making my way through JOSEPHINE FOSTER’s back catalog of CD-Rs and side projects after being floored by the mystical grandeur of her CD from late 2004 with The Supposed called “All the Leaves Are Gone”. While I wasn’t as amazed by her most recent solo disc “Hazel Eyes, I Will Lead You”, my recent obsessive spins through 2004’s CD-R “Little Life” have me scratching my head as to just what it was I might’ve been missing. Because man, Josephine Foster has got some wacked, genius talent in her, and she is my favorite modern troubadour by a mile. Her songs travel the march of history via a ghostly linkage with the Appalachian porch whisperers of the pre-WWII era, with a pinch of the British Isles folk touch to boot. I excitedly played “All the Leaves Are Gone” for my wife earlier this year, who carefully listened and then asked, “So when did you turn into a smelly hippie?”. I shot back a wounded “I am not a fucking hippie!”, but the damage had been done. Later that evening, alone in front of a mirror, I observed my closely-trimmed locks and relatively conservative style of dress and concluded that fine, maybe I am a hippie on the inside, and that’s okay. Having made peace with it, I proceeded to blow my cash on Ms. Foster’s entire back catalog, some of which is still trickling in via mail order this week.

“Little Life” is going to be hard to top, though. 11 mostly brief, plucked tunes that all but announce “home recording” – but for a first-take home recording to come off so vigorous and full of life is rare, unless the artist herself is in a class above. Foster writes these little shards of whimsy like she can do it in her sleep – and I’ll bet it’s not for nothing that her web site is called “100 Songs I Sing”, though I reckon she's got far more than that up her sleeve. These 11 are all excellent – Foster maintains that this was originally meant as a children’s record, which shouldn’t put you off in the least, as only the buoyant nature of some of these (“Tom Peck”, “Shay Shay”) make them “child-like”. (though it’s not at all a stretch to imagine a kid totally getting down to it). The fact that Foster’s rich, trilling, Kate Bush-like operatic voice is an acquired taste might scare a few kids of all ages as well – but now that I’m used to how unique & cool her voice is, I can’t even imagine what these songs would sound like piping out of a more pedestrian vocalist. We’re going to be delving into more Josephine Foster-related material in the next few weeks/months on this site, but if you can get your mitts on this CD-R, you should rush-order a holiday present for yourself this instant.
posted by Jay H. at 4:18 PM