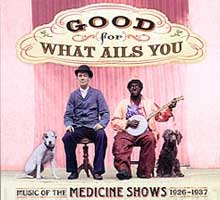 The Old Hat label is quickly becoming the chief “rival” to Revenant Records for incredible archival releases of pre-WWII blues, hillbilly and string band material. Their last two packages – the Joe Bussard “Down In The Basement” 78rpm collection and this new double CD – are beautifully packaged treasure chests plum full of vintage, unheard material only previously obsessed about by collectors and 78 freaks. It seems to come with the territory these days that if you’re going to put forth a bunch of rare old material that the public’s never before heard, you gotta also spend the time and the $$ to ensure that the liner notes are bursting with information, rediscovered photos & old timey arcana of all stripes. Old Hat spared no expense in putting together “Good For What Ails You: Music Of The Medicine Shows 1926-1937”, nor in trying to forge a somewhat vague linkage between the songs herein and the 19th & early 20th century phenomena of medicine shows. These shows were traveling entertainment squads that went to primarily rural towns to huck cures & medicines of often dubious efficacy, and the story is that each of the performers on these discs were known to have performed at them at one time or another in their careers.

The liners make it pretty clear, though, that the heyday of the medicine show was really the latter years of the 1800's, so these 1926-37 recordings may or may not truly capture the spirit of show's chosen entertainers; think of the subtle but significant evolution of rock music from, say, 1965 to the present day -- a span of 40 years roughly in line with the timeline we're talking about here. In any event, the two discs are a hoot nonetheless. Very little "blues" are to be found here, as it was all about singin' and dancin' and partin' the good folks from their money, so a very "jaunty" feel is spread liberally over the 48 different tracks. Many are novelty songs, some quite funny to the hoi polloi in their day I'm sure, such as "I Heard The Voice of a Porkchop" by JIM JACKSON or "C-h-i-c-k-e-n Spells Chicken" by KIRK McGEE & BLYTHE POTEET (you can never get enough chicken songs, am I right?). My favorite of these is the excellent laff riot "Ticklish Reuben" by CHARLIE PARKER & MACK WOOLBRIGHT, with an extended chortle as the main verse. Try getting this laugh out of your head after a couple of listens and then try not to go totally bonkers in the process, since it can't be done. There are some frenetic fiddle breakdowns and some great male/female duets like the opening killer from DADDY STOVEPIPE & MISSISSIPPI SARAH ("The Spasm"), but what this collection is missing are the jaw-hitting-the-floor revelations that accompanied Revenent's latest unearthing, the "American Primitive, Volume 2" collection. This one is just more about relaying some good times & providing the non-collector with some 78s that have rarely been heard before, and as such, it's an excellent companion to have humming in the background on "repeat" as you go about your day & consuming your own medicines. I did just that through three entire spins of both discs just yesterday, and I still am quite fond of the thing, so drop your $27 now & see if you too end up in the same place.
posted by Jay H. at 1:55 PM