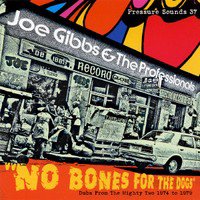 Given the high-profile reggae 45s these deep dubs backed circa 1974-1979 - including CULTURE's "Two Sevens Clash" and GREGORY ISAACS' "Babylon Too Rough", you'd have probably thought this stuff would have been widely available before now, and you'd have thought wrong. Chalk another one up for Adrian Sherwood's PRESSURE SOUNDS, who in 2002 collected 18 of the most killer dubs of the era from "The Mighty Two" -- producer Joe Gibbs and dub pioneer engineer Errol Thompson. These versions are typically buried miles below the original roots reggae fare, layered underneath gurgling water, car horns, and fantastic echoes of all kinds. "No Bones For The Dogs" is something I got clued into vis-a-vis a comment left on a December post I did on the Impact All-Stars -- and kudos yet again to Tom the commenter, who has done more than any single individual to steer me down the proper righteous path when it comes to dub. He's dead-on with this recommendation as usual, given its predilection for bizarre instrumentals and completely blurred acid-trip vocal effects. These B-sides, taken as a whole, actually evolve from puritan roots beginnings into a weirdo sort of electronic dub as the decade closes, completely in line with the path the genre was taking -- or rather, Gibbs & Thompson's stuff was so ace, they were undoubtedly leading the flock there themselves. Seriously, do the riches from this era never cease? I'm beginning to get the sense that they don't.
posted by Jay H. at 8:18 AM