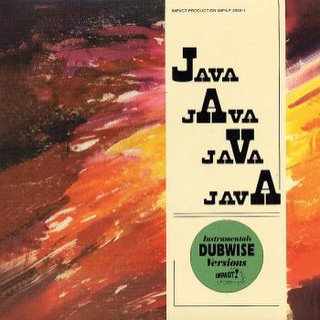 Ever since I fell for Jamaican dub in a big way some 5-6 years ago, and particularly since I embarked on a half-hearted historical study of said form. I’ve been dying to hear the record that some authorities have called “the first dub album ever”, 1972’s “Java Java Java Java” by the musicians clustered around Kingston Studio & record shop “Randy’s”. Moreover, because one of the greatest sets of eat-you-alive early dub recordings (“IMHO”) is the IMPACT ALL-STARS’ “Forward The Bass – Dub From Randy’s” CD, and because many of those tracks have a lineage directly from the “Java x4” sessions, well, I’ve been hot to hear it for sure. Yet of all the dub riches flowing every year onto CD, no one’s taken the initiative (to my knowledge) to press up this landmark record onto digital, and I figured original copies were going to change hands for $100 and upwards and didn’t bother scanning the listings. Everything eventually turns up on CD or at least on Soulseek, right? Imagine my surprise when I inadvertently fell upon a reissued version of the LP last month at a record store in Santa Cruz, CA, a town very friendly to natty dread culture. Tearing off the shrink wrap, plopping my kid in front of the TV and slamming the door to my record sanctuary, this is what I found.

“Java Java Java Java” is strikingly pedestrian when stacked up against the ribbon-cutting manipulations of later pioneers like KING TUBBY and SCIENTIST. I suspect it’s because much of the source material in 1972 emanated from either late 60s rocksteady or the early straight-up soulful reggae music that was popular at the time, whereas Tubby and his peers had the harder-edged, cavernous bass-thumping “roots” music to work with circa 1974 and onward. Befitting its status as the first dub record, its cosmic experimentations aren’t particularly cosmic, which is definitely not to say they aren’t good. Rather, what you get is instrumentation that drops out, but not dramatically. You get vocals that echo and horns that are tripled & quadrupled, but not in a manner that fries the mind, or as my friend MM delicately puts it, “tears your face off”. Some tracks – like “Black Man Dub” and “Guiding Dub” (same rhythm as “Jaro” from “Forward The Bass”) are essential & are full of foreboding and mystery, whereas others sound like lightly-treated reggae of relatively minor consequence. Mostly, though, it’s a consistently solid slab of “version” before “version” had hit the mainstream of Jamaica.

Oh, and most online representations of this record have it as being performed by the “Impact All-Stars”, but it’s my distinct impression that that moniker was only conjured up after “Forward The Bass” came out in 1998, and that this record was only known by its working title until recently. Correct me if I’m wrong, dubheads linking to this site from the Terminal Boredom and In The Red links pages (by the way, a huge chunk of Agony Shorthand’s traffic comes from those links, so thank you to both of ya). That’s one of the things that makes weird dub perfect for collector dorks: the mysterious packaging, the ultra-limited pressings, the no-picture-sleeve 45s, and the immense quantity of the goods only available on vinyl to this day. Now that I’ve heard the fount of it all, I’m absolutely the better for it, and will continue my deep dive into all corners of this strange and challenging strain of creativity.
posted by Jay H. at 8:29 AM