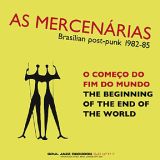 As mentioned in an earlier review of the recent Brazilian early 80s post-punk comp "The Sexual Life of the Savages", if you'd have told me there were some happening Brazilian bands from that era whose records I'd want to give multiple non-cultural relativism-driven spins to, I'd have said no way. I'd still say that, save for one - AS MERCENARIAS. This Soul Jazz retrospective takes in virtually all of this all-female no wave/funk impact unit's 1982-85 recordings in one fell swoop, and by & large, it's a great thing. There are moments of pure out-and-out scorch on this thing, like "Panico" and "Policia", the latter of which is a blistering 70-second piledriver that could have been performed by ERASE ERRATA twenty years later. Other, slower numbers recall minimalist UK touchstones like the POP GROUP, THE SLITS and PUBLIC IMAGE LTD., and all full of aggro, spat vocals and a general tone bordering on tension and paranoia. The chops are first-rate -- everything is mixed real, real well & when the bands's done with one fear-provoking shouter or another, it cuts off like that - boom, over. Later in the CD there are moments of deep, Banshees-like watery guitar warbling and longer song lengths (like over 3 minutes!) and these are just OK. I'm just glad to have another rock record from South America in the mix for the first time in years -- that AGUATURBIA record was looking pretty forlorn waiting for a tropically hot, southern hemisphere neighbor to join in the storage shed.
posted by Jay H. at 9:00 AM