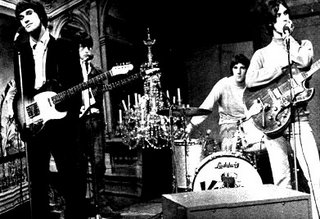 Barely serviceable and completely non-essential collection of KINKS rarities, not all of them even live on the BBC. Truth in advertising, folks! Can you believe a bootlegger would do that? This one chuffed me off for several reasons - first, the perilous quality of some of the "live on the radio" recordings (it's not horrid, but some fade in early in the song, sometimes even when the vocals have already started); second, the average, workaday versions of songs like "See My Friend" and "David Watts" that were better in the real studio; third, my sneaking, probably ill-informed suspicion that at least two tracks -- "Mr. Pleasant" and "Susannah's Still Alive" -- truly are from the records and aren't "live" per se, and so on. There's some good German TV stuff at the end ("I'm A Lover Not A Fighter"!) that maybe redeems it as a salvageable collection, but barely if so. It is certainly not to be confused with a legit collection of Kinks BBC rarities, and is one of those that's so non-necessary that even up-to-date sites of Kinks bootlegs don't list it.
posted by Jay H. at 9:10 AM