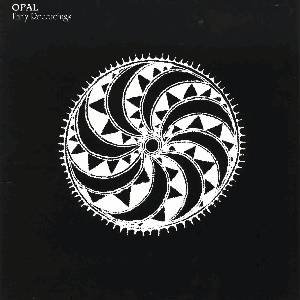 OPAL changed their sound fairly drastically after their first sets of 1983-87 recordings, most of which were completed under the name CLAY ALLISON. With the coming of 1987's "Happy Nightmare Baby", their only proper album, came a band with a huge debt to both first-LP PINK FLOYD and CAN, rather than the soft parade of their strummed "Madcap Laughs"-like whispers over a distinctly quiet 1983-84 paisley underground vibe. These recordings, though, were thankfully not lost to time for long, and in 1989, they were taken together on an LP called "Early Recordings". For a long time this was my favorite of the two Opal discs, particularly because I was so smitten with the tracks "Northern Line" and "Fell From The Sun", two perfect songs of dark night, languid-eyed moon blues. Every girl that I had the hots for and with whom I'd reached the crucial "tape-making stage" around this time got at least one of those two songs on her tape, without question. They're still great, and listening to this today I remember why I almost always played Side 2 of the LP and not the first side. Side A has some precious DOORS-like tomfoolery and is a little too gentle for my tastes, but the first song "Empty Box Blues" is fantastic. Side B really slides into the Opal stuff I really go for, not just the aforementioned tracks but even "Strange Delight" and "Harriet Brown", which some might argue suffer from a bit of preciousness themselves, but I don't friggin' care. I like how the band later developed into a more rocking and mystical beast, and I even hung on through the first MAZZY STAR record, despite Kendra Smith not being part of the band, because - well, because I just liked the overall cut of their jib. I suppose David Roback was instrumental in creating a great starry-eyed spiritual sound that was deceptively working its magick power while I dreamt. It's kind of nice to revisit this stuff the past month & a half and recognize that it deserves a corner seat at the "best of the late 80s" table.
posted by Jay H. at 8:26 AM