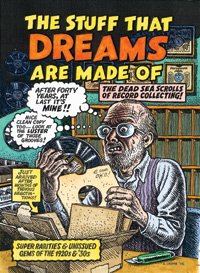 This fine new collection from Yazoo is a great example of attempting a “file sharing-buster” to keep folks actually spending money and buying CDs. It sure worked on me. The two discs of “super-rare” old 78s are housed in a DVD-like packaging gatefold – my copy had “not a DVD!” stickers placed on it by the record store – and contains a booklet with liner notes and cartoons by R. Crumb detailing record collector nerd-dom. It just felt good in my hand, and had a killer lineup of exclusive tracks, so I bought it. While not quite the eye-opener that last year’s “American Primitive, Vol. 2” was, this collection of 1920s-30s blues & hillbilly rave-ups has the added bonus of compiling some of the holy grail tracks that collectors & general Americana historians have been seeking for years. This marks the first appearance of two early SON HOUSE tracks that recently were found, “Clarksdale Moan” & “Mississippi County Farm Blues”, which is pretty amazing in & of itself. Neither has the blood-curdling power of “My Black Mama” or “Dry Spell Blues”, but “Clarksdale Moan” in particular is still something special, a mournful, complex, guitar-dazzle deep blues. My top pick, though, is a devastating Skip James-like blues from KING SOLOMON HILL called “Whoopee Blues (alternate take)” – and if I had heard the other one before (I haven’t), it’d still be the most amazing thing on here. Hill evokes the same sort of dragging, death-can’t-come-soon-enough feeling of James’ “Hard Time Killing Floor Blues”, and his guitar playing is evocative of personal demons. I can’t get enough of this one, and am going out this week to buy JSP’s cheapo “Paramount Masters” box set, which apparently has the guy’s complete works.

GEESHIE WILEY makes her second appearance in my life after last year’s incredible tracks surfaced on “American Primitive Vol. 2”, but this time she’s merely way above average, with a great lowdown “Skinny Leg Blues”. On the cracker front, the GEORGIA POT LICKERS’ 78 is evidently a huge find in collecting circles, and their 2 tracks on here are a blast – “Up Jumped The Rabbit” and “Chicken Don’t Roost Too High” will have you cacklin’ and gallopin’ around the hog pen, and deserve every bit of reverent praise they’re getting. Very little to whisper ill of on this 2xCD. The 20-page full-color booklet’s really nothing to speak of, just some meditations on collecting and the packrat nature of obsessives who load their house with ephemera (not simply 78rpm records). You gotta figure that collections like this are going to be few in number in subsequent years - even its existance in 2006 is sort of miraculous, as ultra-rare 78s are still turning up in thrift stores and liberated estate sale collections. But there's a rare WILLIE BROWN 78 out there that's never been found nor heard post-1960, and a handful of others, so.......keep those eyes peeled.
posted by Jay H. at 8:37 AM