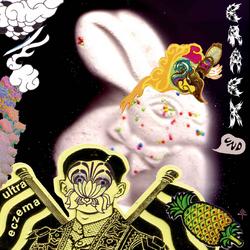 Having been newly hipped to the bizarro French garage/art absurd rock scene defined by hot acts like CHEVEU, FRUSTRATION, VOLT and CRASH NORMAL, I’ve been willing to take a flyer for the young pups just coming out of this circle like CRACK UND ULTRA ECZEMA, whose jarring art-agit caterwaul “Testicle” on the “Tete De Bebe” comp is one of the best things we’ve heard in 2006 to date. The new CD is regrettably only about half that good, but that still ain’t bad. It’s tough to get a definite bead on where they’re coming from on this one, but for the most part it’s twisted, offbeat post-punk with a weirdo female singer & some great shearing, echo-laden guitar. On tracks like “May They Want You” it sounds like something that would be at home on a 21st-Century In The Red release, akin to sorta left-of-center acts like the Clone Defects or The Intelligence. Over an entire disc there’s some rough parts, some boring parts and some parts that explode like cats on a hot plate. Their “Mambo Mozarella”, a raucous take on a song only known to me previously from the “Big Night” soundtrack, is a total gas, and there’s even a creepy, noise-laden hidden track a few minutes later to end the CD. I just wish it was all like that, but what are the chances, right?
posted by Jay H. at 8:37 AM