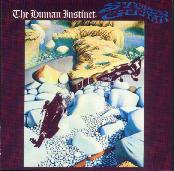 Wow. I’ll be honest, during the great private-press psychedelic freakout 70s LP resurrection boom of the early 1990s, I pretty much sat on the sidelines with my hands folded on my lap. I put out a magazine called Superdope back then, and a friend named Doug Pearson did all the dirty work of ordering & paying for the re-presses of these records from the nascent Forced Exposure mailorder & then writing them up for my mag. I liked a few of them, but it wasn’t really my bag, and I dismissed most of the bogus excitement as the typical bored record collector shenanigans. I could’ve sworn I’d actually heard the HUMAN INSTINCT “Stoned Guitar” record back then, but then if I had, I would’ve been blown clean away by “Black Sally”, the howling aggro-psych/metal gutpuncher that starts this terrific record off, and then I would’ve told you all about it.

I only got the good word on this 1970 LP again – after years of seeing frothing references to this New Zealand-based act’s Maori guitarist Billy T.K., and remembering that VERMONSTER, a Crystallized Movements spin-off band, covered some of this on an LP years back – after reading a back issue of GALACTIC ZOO DOSSIER a few weeks ago. I think it may have even been one of those “guitar hero trading cards” he included in the last couple of issues. The description of the record “Stoned Guitar” intrigued me, so I set about a-searchin’ for it on the Interweb. Sure enough, there it was – and here it is. The record, while not a masterpiece by any stretch (it would have been if all the songs had been “Black Sally”), is still a huge find. Wide-open, swooshing fuzz is all over the place here, and the entire band is totally locked in on the hard & heavy acid jams (right onnnn!). Most are long-ish psych rumbles that have a defined place for Billy T.K. to go absolutely bananas on the fuzz pedals, and go bananas he does. The title track is outrageously loud & will clear the dust off your speakers but good.....but then there’s also a little somethin’ for the ladies too, a pretty lil’ Bic-lighter-friendly ballad called “Tomorrow”. I think the last track, “Railway & Gun”, which returns to the screaming leads & clattering drums of the others, is actually a live number. It’s hard to believe this was locked out of my consciousness for all these years, but it’s my mistake, and I’m hoping you join me in belated Bacchanalian celebration of its charms.
posted by Jay H. at 9:14 AM