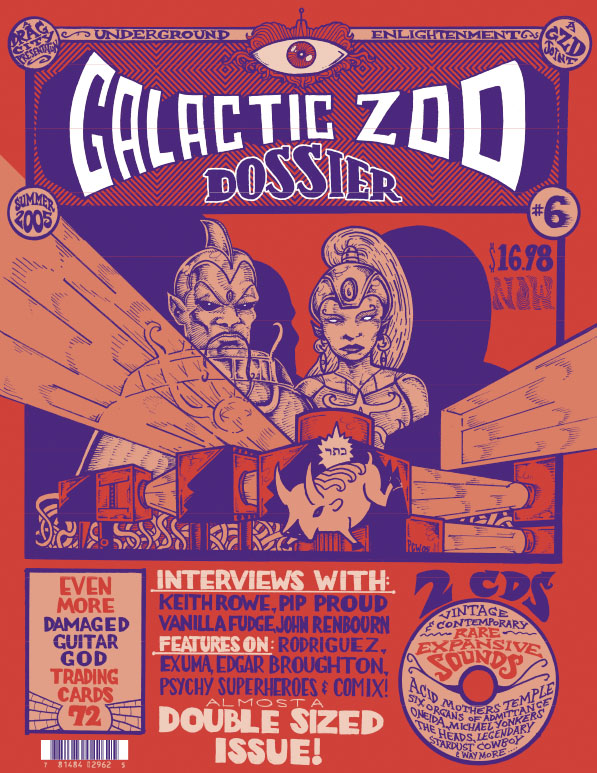 Now this is a fanzine, one put out by Steve Krakow a.k.a. "Plastic Crimewave" of PLASTIC CRIMEWAVE SOUND, a man who has apparently devoted his life to all things even tangentially psychedelic. This is the first one of these I've bought, but I reckon I'll line up from here on in appreciation of the sweat equity Krakow puts into this compendium. He not only writes most of it -- by hand, no less (i.e. no typewriters or Word Documents) -- but illustrates it too, including renderings of STACKWADDY, KEITH ROWE, JOHN RENBOURNE, EDGAR BROUGHTON BAND and others from a scene I barely recognize. "The freak scene", I think I've heard it called. He's so into it that he includes a bunch of clipped Marvel & DC comics from the 60s/70s in which one or more character was vaguely drawn as either "psychedelic", a rocker or a hippie, with some ultra-enthusiastic commentary scribbled in the margins ("This is great!", "Check out this cat!" etc.). It's a really fun read, covering the axis of heavy guitar, damaged folk and acid-blues of yesteryear & today, full of warmth & worship for the giants of the form.

Krakow was also kind enough to include a double CD of fellow travelers past and present, with pretty much everything on here being unavailable elsewhere. Unlike most freebie CDs or 45s that fall out of 'zines and into my trash can, this one's got some hot, frothing stuff. One disc is pre-21st Century psych/acid/noise/folk/etc., with the winners (for me) being a 1971 DENNY GERRARD pop number called "Hole In My Shadow"; a couple heavy or abrasive 1990 Kansas bands called SKOG and TOOL; and an "Unknown Acetate" that's exceptional hard R&B-meets-demented all-thumbs rock. The other disc is virtually all recent stuff, with excellent hum like the lilting lo-fidelity tweaker "Leader Soldier" from Josephine Foster and CHILDREN'S HOUR and a wild folk-ish ride from a Nashville act I've never heard of called THE CHERRY BLOSSOMS. Imagine The Shaggs jamming with the HOLY MODAL ROUNDERS or something -- what a great song! Anyone know how I can track down their stuff? Other interesting obscurities appear from the SAWDUST CAESARS and (SOUNDS OF) KALEIDOSCOPE. Whew. I think the choice is clear -- Galactic Zoo Dossier needs to be added to your reading & listening pile for the holiday season, and with Drag City keeping this stuff in print, there's no better time to order than right about now.
posted by Jay H. at 8:18 AM