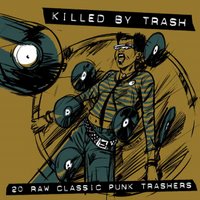 You know, I don’t think I have had a single “tribute” record or CD sitting around in my collection for years, until this one showed up unannounced recently. If there’s any sort of tribute/cover collection I can get my hands around & lustily applaud, it’s a comp of a bunch of modern, energized punk bands bashing the crap out of late 70s/early 80s KBD masterpieces, but I also was pretty certain it’d still be pretty lame. Every juggernaut speed demon these days has a repertoire-filler or set-closer that includes a “Bummer Bitch” or a “Radiation Masturbation”, and like clockwork, these chesnuts get hauled out during encores while the band drunkenly leaps around the stage & fukks shit up to the oldies. Awesome! Yet this one still is kind of neat, depending on which act is doing the rocking. I’m partial to the excellent run-through of the Wipers’ “Better Off Dead” from DIGGER & THE PUSSYCATS – these guys nail the song’s moody, raw chord shifts, and have better vocals than Greg Sage to boot. Another hot one is the screeching “Just Head” from the previously unknown (to me) LOS RAW GOSPELS – other than a burst of very 21st-century unholy feedback toward the middle, this could easily have been a lost 1981 classic itself. Great work, fellas. THE CARBONAS do a fast and traditional “Don’t Hide Your Hate”, maybe the best original recipe Dutch punk song ever (by FILTH, in case you’re asking), that I really like – and the HEARTATTACKS one-up them and tackle the hotwired Swedish rave-up “Jag Ska Aldrig Do” (DR. ZEKE) in Swedish, like true professionals. The bottom falls out when BLACK TIME contribute a limp and tasteless “Son of Sam” (Chain Gang) – it’s awfully telling that these guys chose the one early punk cover JON SPENCER already did – and when JEFFREY NOVAK just murders “I Hate Music”, a little too obvious of a choice, I’m thinking. You’re not getting anything revolutionary if you spend 30 minutes pogoing to this thing, but if you can close your eyes & pretend you haven’t heard the originals before, then it’s maybe the fourth or fifth best punk rock comp of the year.
posted by Jay H. at 7:23 AM