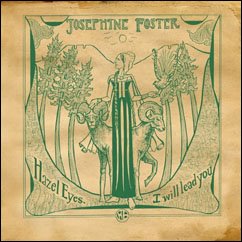 Last September 12th I ventured an ill-considered opinion about this disc that I've since come to regret. I said:

"...I was hoping to be a little more blown away by JOSEPHINE FOSTER's recent "Hazel Eyes, I Will Lead You" CD, the way I recently was by her incredible record with THE SUPPOSED called "All The Leaves Are Gone" (one of the single best set of rock recordings the past 2-3 years). Ms. Foster often squeaks and warbles like KATE BUSH circa "Army Dreamers", and while that actually bothers me not one bit, the lack of any real throat-grabbing folk songs sorta does. She's got something pretty special going on, I just don't think it's located here.....

You know what? It is located here. The more I went back to Foster's official 2005 "debut" (though she has a small liferaft of CD-Rs and releases with other band configurations), the more I clutched onto it as a great leap forward into the psychedelic folk beyond. As I think I've blathered at least three times in other raves for her work, she really takes a little getting used to, and I even I was beguiled and boggled by this one before falling headfirst. I love the delicate complexity of each ringing tone she coaxes out of the guitar in strange tunings and stranger patterns, and with a voice that's equally as eerie (and beautiful beyond doubt), this CD is rewarding in spades. Those of you who can handle folk when it's served up in raw, druggy slices will lap this up, and if you can take in baroque music from the inner chambers then you'll get even warmer. "Hazel Eyes, I Will Lead You" is deeply absorbing, and now that I've lived with it for a while I kick myself for ever thinking otherwise. JOSEPHINE FOSTER is a singular talent and one of America's finest. It's probably somewhat timely to publicly embrace this one, only a day before the official release of her new album, which oh by the way is in German. I'll settle in with my pipe, slippers and altbier before embarking on a rush to judgment on that one.
posted by Jay H. at 8:45 AM