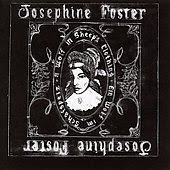 I'm not sure what possessed Frau Foster, one of Agony Shorthand's 21st Century favorites (see here, here and here), to record an album's worth of 19th Century German folk tunes sung in the mother tongue, but they say it's a free country. Sounding like nothing so much as an eccentric German nana after a few too many kolsches, Foster tackles the work of composers like Schubert and Brahams with her distinctly rich and operatic "hippie mystic" pipes. The music trends toward the experimental, and lacks the hard folk edge of her better material found on "Hazel Eyes, I Will Lead You" & instead wanders into the lonesome & weird BORN HELLER territory (yet another band of hers). The long and ark "Auf einer Burg" might make you slit your wrists in boredom, pain or terror, not sure which. I don't know, I can't say that the whole shebang does that much for me. Seems like this would have made a better CD-R to be mailed out to the fan club than a release in & of itself, don't you think?
posted by Jay H. at 9:07 AM